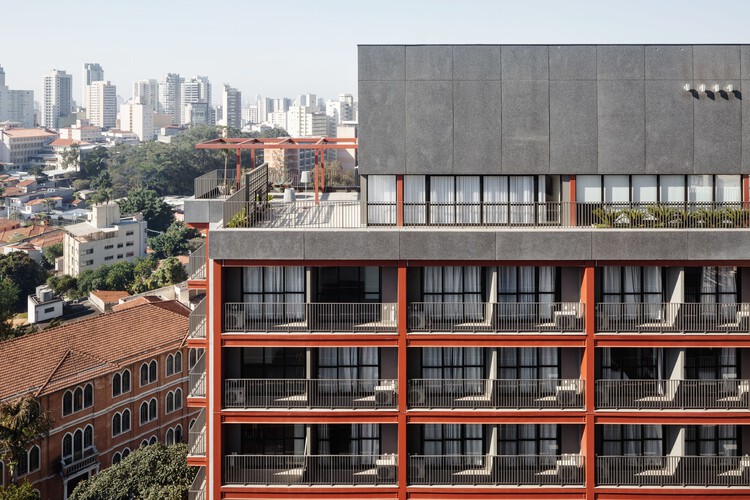 Located in a rectangular plot area of 644 m² and with a super built up area of 3,759.05m² in a residential zoning district ZEU (Zona Eixo de Estruturação da Transformação Urbana), the residential tower has a ground floor plus eleven habitational stories summing up to a total of 109 studio units from which 21 units of 24.70 m², 22 studio units of 20.88m² and 66 studio units of 19.80m². The largest studio units are faced to the front and the rear of the lot.

In order to use the maximum plot ratio, comply with the restrictions of the zoning and building codes, and respect the building setback rules, the geometry of the building has resulted in a linear-shaped tower with its studio units facing towards the front, right and rear facades. The repetition of modules and prefabricated elements gives a unique composition to the facades on account of the exposure of the painted steel structure, the iron guardrails on the terraces, and the color variation of the prefab concrete panels alternating on the facade and highlighting the aesthetic composition.

The project aims to integrate with the young crowd and the students surrounding the Vila Mariana neighborhood. The project is located just a few meters from two educational facilities such as ESPM (Escola Superior de Propaganda e Marketing) and FAPCOM (Faculdade Paulus de Tecnologia e Comunicação). The precast Brazilian cobogó wall, with its hollow blocks, creates transparency to the access of the building and minimizes the physical barriers between the street and the ground floor, where one may find amenity areas and an extensive bike rack storage space which evoke an active urban mobility culture.

The social interaction in common areas of the ground level encompasses various multifunctional and versatile spaces in order to blend the occupants along with the spaces and creates a visual and physical interaction. Recreation areas are also found on the rooftop along with the contemplative spaces, social gathering spaces, and a spa allowing the occupants to take full advantage of the uninterrupted view of the neighborhood.